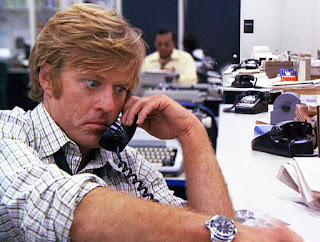 On the one hand, who would do that to a Rolex, or any watch -- not screw in the crown? An unscrewed crown invites every molecule of humidity, every drop of water to invade the watch. It's the watch equivalent of a diet that consists of Big Macs and Cokes, certain to lead to an early death.

The photo above is from the 1976 movie, All The President's Men, a political thriller about Watergate and the downfall of President Richard Nixon, in which Robert Redford portrayed Bob Woodward of the Washington Post. (Redford's co-star, Dustin Hoffman, played Carl Bernstein.)

Perhaps the pulled out crown was a symbol of how busy Woodward and Bernstein were, that because of frenetic pace of the Watergate investigation Woodward didn't even have time to screw in his Submariner's crown. Perhaps. It's more likely this was just a case of watch malpractice.