It's hard to describe the sensation that accompanies wearing a Nixie tube watch. I often feel like I've strapped on a time machine and I'm one step away from 1961.

Nixie tubes are cathode display tubes filled with an inert gas, usually neon. Nixie tubes were invented in the 1950's and were popular props in movies from the 1950's, 60's and 70's that tried to portray that era's vision of the future. The watch is filled with retro technology.

While Nixie tube clocks are fairly common (you can find them on Etsy, eBay and Amazon), Nixie tube watches are rare, in part because it's hard to squeeze relatively large tubes into a small wristwatch space.

The watch pictured here is a NIWA Nixie tube watch, a Kickstarter project. It costs about $500, but you need to contact the designers via their Kickstarter or Facebook page for availability.

You set the watch by using a magnetic wand. The two tube display first shows hours (12 or 24 -- your pick), then minutes, and finally seconds. The watch comes with a USB charger and has a battery backup. The time is displayed when you tilt your wrist to a 45% angle, a setting that can be changed, too. The NIWA watch is 55mm in diameter, which looks especially large on my 6 1/4 inch wrist. The watch needs to be charged about every four days, depending on how often you look at it (which is likely to be very often.)


Why buy a particular watch? Sometimes it's for fashion -- to match a suit, for instance. That's not going to be a reason to buy a Nixie tube watch. Sometimes it's because you adore the movement or technology that's inside the watch -- that's certainly a reason to get a Nixie tube watch. And sometimes you buy a particular watch simply because it's incredible fun. Few watches are as fun as this one. 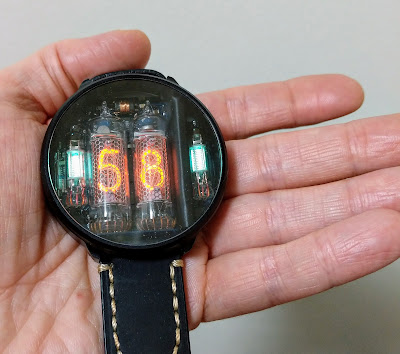