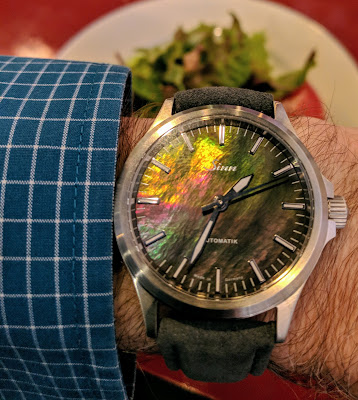 When my Sinn 556 mother of pearl watch first arrived, I was glum because the dial was as black as midnight before a storm on a moonless night. There was no hint of mother of pearlness, no shine, no glow.

I thought I'd been shipped the wrong watch, and with that thought came another: How am I going to return this watch all the way to Germany?

After my heart returned to its correct spot in my chest I noticed that the mother of pearl's kaleidoscopic rainbow only appears when the light is reflected just so. When you tilt your wrist to reflect the light, letting your eyes catch the vivid colors, you see a watch dial stands in a category of its own.

The Sinn watch company was founded in 1961 by Helmut Sinn, a pilot and flight instructor. Many of their watches have a classic aviation look.

The Sinn 556 feels light on the wrist. It's sporty, but wouldn't look out of place peeking out from under a suit. To say it's a gorgeous watch and a terrific value would be an understatement.

The only problem: You can't have it. At least not if you live in the United States because mother of pearl is on the US's banned products list. But if you can get one...it's a beautiful watch.

Email ThisBlogThis!Share to TwitterShare to FacebookShare to Pinterest
Labels: Sinn