Collecting watches isn’t as easy as collecting simple things like baseball cards or Pez dispensers. If you want the maximum fulfillment from collecting watches you need to be able to explain to somebody you’ve just met at a party how a mechanical watch works, the difference between automatic and manual wind watches, and why a $1,000 watch is considered inexpensive. You have to be able to sketch a the inside of a watch with a drawing that would impress John Harrison* himself. 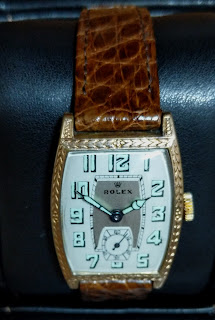 Watches are complicated machines, often with hundreds of parts with fancy-sounding French and German names that spell checkers can’t even guess at. Many watches are an amalgam of parts invented a century ago and components so advanced they seem to have been created by aliens from the future. Then there are the seemingly endless number of watch complications (a complication is a trick a watch can perform) such as moonphase, chronograph, and fourndaynte.

What do all those words mean? What do all those parts and complications do? With this glossary, you’ll learn the meaning of some of the more interesting watch words and be on your way toward enjoying watch collecting even more.

Hacking: Sound you make to disguise the answer to your spouse's question, "How much was that watch?"

Chronograph: The complication you wish you had used before you got that parking ticket.

Bezel: The first part of a new watch to be scratched.

Authorized Dealer: The only person who ever notices your new watch.

Cyclops: The part of the watch that reminds you that you haven't set the date correctly

Clear Case Back: The part of the watch you want to display.

Tourbillon: The French part of the watch that some spell-checkers are unaware of.

Power Reserve (manual wind): Time until your fingers get exercise.

Power Reserve (automatic): Gauge that shows you how vigorously and long to shake your wrist so it reads full.

Moonphase: Complication that can never be set exactly right.

Minute Repeater: The complication mostly likely to get you shot.

Caliber: Mysterious numbers that reveal the most important information about your watch. See The Da Vinci Code.

GMT: The complication that reminds you you'd rather be somewhere else.

Servicing: A recurring 20% tax on your watch.

Tachometer: Something to impress with if you can’t afford a Rolex.

Escapement: The part of the watch that does something important.

Frequency: A number that if bigger, is better.

Fourndaynte: A small seconds hand that rotates once every second, sixty times the speed of a regular seconds hand. Used to make slow, meandering meetings seem even slower.

Quartz: A watch that runs out of power while you’re rushing to catch a flight.

Lugs: Part of the watch that overhangs your wrist.

Watch Winder: A device to keep automatic watches wound that may or may not be good for your watch.

*If you’re not familiar with John Harrison, who invented the marine chronometer which enabled ships in the 18th century to calculate longitude and not crash into rocks or wander into a sea of serpent-like monsters, let me recommend the beautifully written and fascinating book, Longitude: The True Story of a Lone Genius Who Solved the Greatest Scientific Problem of His Time, by Dava Sobel. (https://www.amazon.com/Longitude-Genius-Greatest-Scientific-Problem-ebook/dp/B003WUYE66/)

Email ThisBlogThis!Share to TwitterShare to FacebookShare to Pinterest
Labels: humor