Last week Congress passed a law requiring all wristwatch reviews to delineate a watch's diameter and lug-to-lug distance in the article's first paragraph. 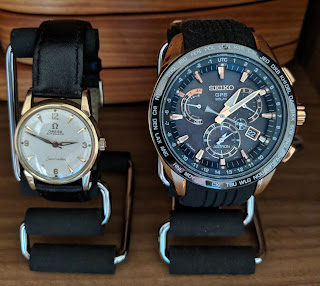 The bill was supported by the vast majority of watch collectors, but opposed by several watch manufacturers, including Panerai, IWC, and Hublot. The bill, The Truth in Time Act, was also condemned by the ACLU, which said, "This law is a clear infringement on the First Amendment rights of watchmakers and watch journalists." The ACLU also said the law is fundamentally flawed because it doesn't address a watch’s thickness, how tightly integrated the lugs are, or if the case is curved in sync with the wearer’s wrist.

Most watch buyers support the legislation.

"I often have to scan an article three or four times to find that information," said Roger Lewis, a watch collector from Bangor, Maine, who owns seven Rolexes. "I have no intention of reading a full watch review if the watch is too big or too small or the lugs are too enormous for my wrist. Having that information up front let's me know if I should even bother reading the review. I mostly want to see the pictures in reviews, anyway."

An unscientific man-on-the-street survey of watch wearers conducted by this reporter found that there was overwhelming support for the TTA even among people who wear large watches . "Yeah. I like big watches, so why would I want to read about a watch that's not even 40 mm?" said one watch collector in New York. The collector was wearing an IWC Pilot Chronograph.

Another watch collector, Lamont Harold, an aspiring actor working as a waiter in Los Angeles, said, "Have you ever tried to use the find function on a web browser to quickly search for 'mm,' as in the mm size of a watch? I hate that I have to exclude any watch over 39 mm, but my wrist is only 6 1/2 inches, and I'd rather not waste time with a review if I can't wear the watch."

Representative David Alexander, one of the bills sponsors, said the TTA was a “compromise between freedom of speech and consumer sanity, just like a finely balanced wristwatch."

Fines start at $100 per violation, but increase to $500 for neglecting to mention the watch's diameter anywhere in the article.

Email ThisBlogThis!Share to TwitterShare to FacebookShare to Pinterest
Labels: humor