“Mommy, can I have a lollipop?” Bobby tugged on his mother’s arm with all the strength his five-year-old muscles could muster. He opened his eyes wide, doing his best to resemble Pepper's face when she begged for food. Pepper was their beagle. “Look, Mommy, that man has a basket full. Maybe there’s a blue one. Blue lollipops are my favorite.”

Alice scanned the man up and down, from his perfectly coiffed brown hair, to his impeccably starched white shirt, to his tan, alligator belt, gray, Merino wool pants, and his shiny, unscuffed, Versace black shoes that were laced in perfect symmetry. Had she been single, Alice might have been attracted to the man’s soccer player physique, flawless skin, and come hither lips. But that was long ago, and besides, she was in mom mode.

The man directed his gaze downward, smiled at Bobby, and flicked his wrist so his watch reflected the yellow sunlight toward Bobby’s feet. He traced a rocket ship with the sun’s reflection. “Mommy, please?” Bobby smiled at Alice, trying to mimic the man’s expression. Bobby didn’t notice that his missing two front teeth made him anything but a mirror image of the man with the lollipop basket.

“He’s a Grand Seiko Man,” Alice said, punctuating the sentence as if there was no more that needed to be said. Alice wanted to throw a sheet over the easel the man was standing next to, which displayed photographs of shiny Grand Seikos worn by attractive women and men like him. Bubbling inside her was a powerful urge to pull a pen out of her bag and deface the words, "Grand Seiko. Timeless elegance, relentless perfection." If she had been alone, Alice might have done that. Her muscles tensed, and a vein separated her forehead into two parts. "It's all lies," she needed to scream.

Alice tugged on Bobby’s arm. Bobby planted his feet on the sidewalk, summoning gravity to glue himself in place. “Just one lollipop, mommy, please. My tummy is hungry.”

“If you take a lollipop from a Grand Seiko Man he’s also going to give you a pamphlet. He’s going to want you to read it.

“It doesn’t matter. He’s going to give it to you anyway.” Alice had a vision of throwing out the pamphlet only to have it return, the pamphlet finding its way to Bobby’s pillow as if under the spell of a dark fairy. She’d throw it out again and again, but each time the pamphlet would come back until Bobby was old enough to be persuaded by its dangerous words.

Alice noticed the man grinning. He was counting on her willpower being worn down by a five-year-old. It had happened to her, to every parent in one place or another, and it could happen today.

“It doesn’t matter if you can’t read.” Alice tried to slow her heartbeat by focusing on her breathing. One and two, in; three and four, out. “He’s going to say things to you when you’re close enough to hear him. That’s what the Grand Seiko Man wants, to whisper a few words to innocent little boys, to plant evil thoughts that you'll recall when you're older.”

The man took a small cloth out of his pocket and rubbed the watch's crystal, as if he was waxing a car.

Alice kneeled down. She put her finger under Bobby’s chin, lifting his head so they were eye-to-eye. “He’s a cult member.”

“What’s a cult?” Bobby shook his head like he was trying to expel water from his ears.

“A cult is people who believe false things. There aren’t many Grand Seiko cultists, which is why they stand on the street corners. They want to make more of themselves.”

“And we should keep away from the cult?” 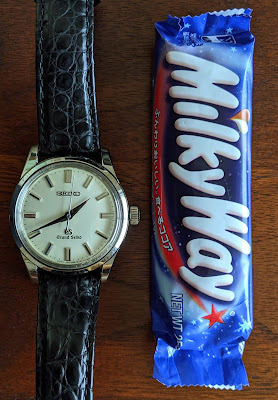 “Yes, Bobby.” Alice ruffled his hair. “There’s a lot you don’t understand now, but you will. We’re Rolex. Most of the world is Rolex.”

“Rawr Ex sounds funny, Mommy.” Bobby bared his teeth, got down on all fours and roared like a lion. "Roar, roar."

Alice pressed her finger against Bobby’s lip. “It’s not good to make fun of the Rolex name.”

"Tell you what." Alice took Bobby's hand, and stood up, lifting him with her. "I hear Baskin Robbins has a new flavor. Let's go see what it is."

Alice shot a satisfying smirk at the Grand Seiko Man before flicking her heels and walking away.