a short story about watches by Bill Adler

"Are you sure you won’t press charges?" The young cop straightened his shirt with a quick tug. He would have smoothed his collar, too, but was already feeling self-conscious about his stiffly starched uniform.

"It's certainly your privilege, but I've never known anyone not to." The cop neglected to mention that he’d only been on the police force for a week and this was his first investigation. "A crime's been committed, and justice should be done." That’s what they taught him at the Academy.

The cop’s name tag read Fitzmond McElroy, but he liked to be called Fitz.

Fitz stood just inside Stan Harwood’s apartment. Fitz had also been taught that a cop can learn more from what you see where somebody lives than by what they tell you. The essence of a person is in their furniture, art, decorations, style of living, and the other artifacts of their life. Stan’s apartment told Fitz that whatever Stan did for a living, Fitz would never know such opulence even if he eventually became a police captain. Fitz patted his Timex.

“Officer —” Stan glanced at Fitz’s name tag. “McElroy. I appreciate your concern and I appreciate your coming so quickly, but I just wanted to report the crime for statistical purposes. I believe crimes should be reported regardless of anything else.” Stan brought his arm to his face and coughed into it. 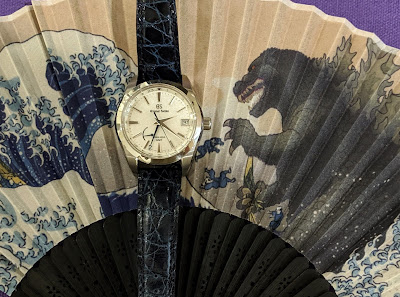 Stan continued to cough for the remainder of the minute. “I’m fine. Just allergies.” As if on cue, a tuxedo cat strolled over, rubbed against Stan’s leg, and then retreated back into another room. “Cat allergy. What can I do? I love Alley.” Stan looked at his watch. “Where were we, Officer McElroy?”

“We were talking about you pressing charges.”

“Of course.” Stan unfastened the metal clasp, snapped it back together, and gently placed his gold Grand Seiko in the policeman’s outstretched palm. With his right hand, Fitz pulled a magnifying loupe out of his pocket and scrunched it with his eye. He rotated the watch through all possible geometric angles. Fitz returned the loupe to his pocket.

Fitz ran his fingertips across the watch’s crystal. “Oh, lovely.” He then held it to his ear. “Hi-beat. There’s no more beautiful sound.”

Fitz retrieved his phone from his other pocket. He tapped the screen, opened an app, and placed the phone’s microphone next to Stan’s watch, silently holding it there for a full two minutes. Red, yellow and blue lines wobbled up and down on the screen in a graphical dance. Below the graph was a digital display that flashed a pattern of numbers: +.01/+.085/+.072/-.0036/-0052. Finally, his phone beeped a long, mellow tone, and the top half of the screen displayed OK in green. Fitz aimed the screen at Stan, who nodded and smiled.

“While the injuries are just cosmetic — it looks like everything’s fine on the inside — that’s still aggravated assault. Plus Diamond Kerr — we caught him thanks to street cameras — ran away, which adds a charge of hit and run. He’s looking at five to ten years. We’re holding Kerr now at the Twenty Second Precinct, but will have to release him in the next seventy-two hours if you don’t press charges.”


Stan put his watch back on. “First offense?”

“It looks like it. Kerr’s record is clean. This is his first wristwatch assault.”

“He probably ran away because he was scared.”

“No doubt about that. But it’s not an excuse for Assault on a Watch.”

“How old are you, Officer McElroy?”

“I'm not going to press charges. If Kerr assaults another watch, I’m sure the NYPD will catch him and the law will punish him. But you saw my Grand Seiko. It's just a microscopic scratch. You can’t even see the mark without a loupe.”

Fitz flipped open his notebook and sighed. “For the record, tell me how it happened.”

“I was just on my way out of Starbucks on 45th and Lex. As I was walking out, this kid — Diamond Kerr — walked in. The metal buckle on his backpack collided with my Grand Seiko and that was that. It was as pure an accident as they come. He looked at me with frightened eyes, like a deer staring into a rifle, and I’m sure his heart stopped while he waited to see if I’d pull out my phone and call 911. But I didn’t. As soon as I left Starbucks and started to walk north along Lexington, he bolted out and fast walked to the south. A block later I looked at my watch and saw no injuries. It was only when I got home and examined it through a magnifying glass that I noticed the scratch. Then I called the police to report it for the record.”

Fitz stopped writing for a moment, looked up, and said, “If it had been intentional Kerr would have faced life.”

Fitz scratched down a few more notes and slipped his notepad into his pocket. “I think we’re done here. Good luck to you, Mr. Harwood.” Fitz stroked his chin. “If I may suggest: Please carry a loupe. If this ever happens again, you should know on the spot if there’s been damage to your watch.”

Stan caressed his watch’s crystal. “That’s not a bad idea.”