"Seymour, waddya up to next weekend?"

"What what? Can't you see I'm busy with a patient?" Seymour hunched over the rigid body on the table.

"They're not patients, Dr. Seymour Haas, and you're not the kind of doctor anyone wants to see."

"Yeah, well, pathologists go to med school just like every other doctor."

Mike Angelo revved his bone saw to maximum. He did his best to spray bits of tissue and blood Seymour's way like the spitballs he used to toss in class in middle school. "Say again! I can't hear you," Mike shouted over the machine. 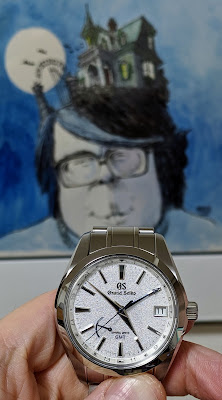 "What I want to say..." Seymour yelled back. He paused to wipe something sticky off his goggles, but ended up smudging his left lens with a mucus sheen. “...is that this one definitely died of the common cold. Lungs and air passages stuffed like a Thanksgiving turkey. Rare for a thirty’s guy, but given the number of people on the planet, even the unexpected and rare will happen. The younger the patient, the more their immune system’s counter attack doesn’t just kill the invading virus, but mortally wounds the victim, too.”

“I'm not sure why they bothered to have his body exhumed. There's no foul play, no drugs, no impalement or bullet holes, no exotic diseases, nothing that required calling me in and missing a Friends rerun. God, that Jennifer Aniston is hot. It was just a cold. Poor guy. I bet when he went to CVS for Nyquil he never expected it would be his last drink."

“Dunno, like I said.” Seymour bent down and peered into Gold’s eyes, the light from his halogen headlamp absorbed by the opaque orbs.

“The exhumation sheet doesn’t say. The requesting name was blank. Somebody’s lazy. But we have a job to do, even when our bosses don’t do theirs,” Seymour said.

The overhead fluorescent light cracked. The crackling reminded Seymour of when he was little and the wind rustled the venetian blinds in his bedroom, amplifying the ghosts that he already knew lived in those blinds, and sending him deep under his blanket. The autopsy room’s pale blue and white tiles were interrupted by a single, faded poster of a cat doing a chin up with the words, “Keep Your Chin Up” printed on it. None of the city’s seven pathologists liked that poster, and nobody knew who hung it. But after a time it became invisible to everyone who worked in this basement room, so there it stayed. A bank of numbered, steel-clad lockers spread from floor to ceiling along the side opposite the doors. On the adjacent wall were a cluster of sinks and basins for washing hands and tools. The room held twelve tables. It used to have thirteen, but a former Chief Medical Examiner had ordered one of the tables removed. “We need more walking around space for cops and such,” he had said.

Mike dropped his instruments next to his patient, and sallied over to Seymour's table. “They should tell us what the deceased did for a living because that would give us more insight into what killed them. Like if it’s a lawyer, it’s going to be a heart attack, or if it’s a race car driver and the body’s 2D, we can surmise he wasn’t pushed off a building. Maybe your guy was a professional ice diver and caught a really bad cold that way.” He surveyed Mike’s patient and asked, "Gold’s been dead about two weeks, right?"

Seymour took the clipboard at the foot of the autopsy table and flipped to the second page. "Yeah, that's what it says."

Mike lifted the dead man's arm, a stiff, rotten branch, tapped around the elbow and forearm, squeezed the upper arm, and said to himself, “Does feel like two weeks.” He turned back to Seymour. "Answer me this. How can it be two weeks if his watch is ticking and showing today’s date?" Mike ran his fingertips along the watch’s crystal like he was polishing it.

“You’re not going to steal a dead man’s watch, are you?” Seymour held the clipboard in his left hand and the pencil attached to it by string in his right, as if he were about to give Mike a demerit.

“That’s exactly why I want it.” Mike offered Seymour a wide, toothy smile. “I’ve never seen a watch that’s still going strong after a body’s been in the ground for two weeks.”

“You’ve been sniffing too much formaldehyde, Dr. Angelo.”

Mike sneered. “Tell me you’ve never stolen anything off a corpse.”

Before Seymour could complete a sentence, stuttering his way through a seemingly random set of consonants and vowels, Mike interrupted, “I saw you slip that diamond ring off a dead lady and pop it into your pocket the week before last.”

“You thought I didn’t notice? You’re so clumsy, so obvious. You may be an okay pathologist — and I’m not saying you are — but you’re a lousy thief. Make a note of that on your clipboard: Seymour Hass will never be a competent thief. So I’m keeping this watch and you’re not going to tell a living soul.”


Seymour stared at his feet. “Okay.” His voice was barely audible. He looked back at Mike, almost making eye contact, but his gaze didn’t rise higher than Mike’s lips “But it’s a quartz watch. Why bother to take it? The battery’s going to last well after the worms and beetles have found the deceased. That’s why it’s still ticking. It’s a quartz. A cell phone battery is going to run down quickly — and it’s so weird that some people want to be buried with their phones —  but a quartz watch will last years whether it's in a grave or not. Quartz equals cheap watch. Probably cost $50, if that. That's why it's ticking. Because it's a cheapo quartz. Don’t you know anything, Mike?”

“If it’s a quartz watch, why does it say ‘Automatic” on the dial? And why does it tick? Quartz watches don’t tick; they’ve make a tack sound, not a tick. Don’t you know anything, Seymour?” 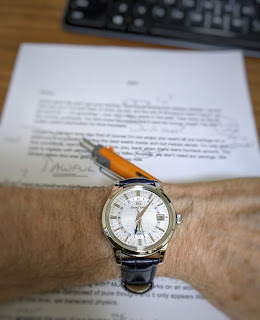 Seymour’s jaw locked open as he assimilated that information. He lowered the binocular magnifying lens over his goggles and bent toward the deceased’s wrist. “Automatic Hi-Beat.” He blinked and looked again. “So it’s an automatic. The corpse probably twitched in the coffin, winding the watch. They do that sometimes. And the exhumation process movement also wound the watch. Nothing to see here. But steal this watch if you want. I’m not going to say anything.” Seymour shuffled his feet and paused before continuing. “This makes us even, though.”

Mike unfastened the watch from Gold’s wrist, an unscratched, perfectly polished Grand Seiko, with a deep, red dial that evoked the sensation of an ancient forest under a blood red moon, and with sword hands that looked like they once belonged to soldiers in a medieval army. An expensive watch, worth thousands. The diamond ring Seymour had snagged probably wasn’t even worth $500. Mike wiped the Grand Seiko’s front and back sides against his pant’s leg, then wedged the watch’s crystal against his chin as he adjusted the metal band on his wrist. After the watch fit just right, Mike raised his arm, shoved it into Seymour’s face, and said, “It looks great, like the deceased meant to gift it to me.”

Seymour recoiled, springing two steps backward. The clipboard fell out of his hands smacking into the table’s legs with a thunderous bang. “Eww.”

“Eww’s not a word you hear from pathologists often,” Mike said. A rapturous laugh rose from his belly.

Seymour sighed. “I’m going to sew Gold up and go home. Maybe I can catch a Friends rerun after all. I’m done with Mr. Gold who died of a cold.”

“You do that,” Mike said before failing to suppress a sneeze. He wiped the back of his hand against his nose. “Me and my watch are out of here.” Mike Angelo expelled a cascade of sneezes as he exited the pathology room.


There’s a saying among watch collectors: Buy the seller, not the watch. If you don’t know the pedigree of the used watch you’re acquiring, you may be getting something more ominous than just a fake, as Mike Angelo discovered.

A different version of this story was published in March 2019.