“I’m tired.” The words slipped past Angie Bard’s lips like air from a deflating balloon. Angie tucked her head on top of Brian’s shoulder. She pressed so closely that their cells nearly merged into one.
“I’m cold, babe. I’m very cold.”

Brian pinched the opening in the gray, wool blanket that enclosed them. His exposed fingers felt like they had been dipped in a frozen pond. 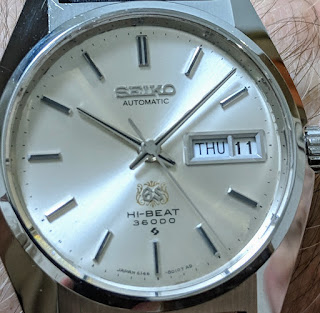 Angie forced her lips into a half smile. “And my ass hurts from sitting on this park bench for six hours.” Her teeth clattered.

They watched the moon dip below the horizon, taking with it the last light, and though it shouldn’t have been, the last of the day's relative warmth. Shivers cascaded along Angie and Brian’s bodies like earthquake aftershocks. “How can the moon make us warm?” Angie asked. “The moon only reflects light, not heat.”

“I don’t know. Physical laws are different on this Earth, in this universe.” Brian wished that his watch's luminous glow could warm them, too, but they had yet to encounter a world where wishing changed reality.

Brian slipped his arm out from under the blanket. Between his shivers and icy drops around his eyes, it was almost impossible to read his watch. Brian brought his wrist closer to his face. The bluish, yellow glow of his Grand Seiko dive watch’s hands read 3:09.

“Okay.” Angie’s teeth tapped against each other. “Thanks for looking at your watch for me. I think if I pulled my arm out of the blanket it would freeze and fall off in an instant.” Angie shivered again. “How much cold did you say a Spring Drive can withstand? I don't want my birthday present to be ruined."

“It’s fine to plus five Celcius. Below that, all bets are off when it comes to accuracy.”

“Dunno. But around that I’m sure. I think my lips are blue.” Brian's teeth sounded like they were communicating directly with Angie's in Morse code.

"Next world will be warm, I'm sure." Brian slid his arm forward again. “Three minutes till 3:13.”

"Just promise me that the next world won't be one where blood sucking bats have replaced birds like three Earths ago." Angie sighed, exhaling ice clouds. "Maybe the next world will be home. I miss my bed and our cat."


"I miss them, too. And having to wear the same watch when slipping from universe to universe isn't natural."

"I hope our cat is more important than being able to wear a different watch every day."

"One minute," Brian clattered. He tapped his watch. “Almost there.”

Angie intertwined her fingers with Brian's. The pain to come would be intense, like being stung by a jellyfish over your entire body, but mercifully brief. "Five seconds," Brian announced.

Angie held her breath to help distract her from the pain. She shut her eyes just before the brilliant white light enveloped them. There was a pop, and then they were gone. 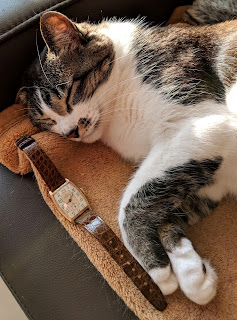 When Angie opened her eyes they were sitting on the same park bench, always the same bench, but it no longer felt like the middle of the Arctic. Angie blinked a few times as she took in her surroundings. This world looked like their home world. Could they be home this time? After slipping between dozens of universes, could they finally have landed in their own Brooklyn, New York? Angie's eyes were drawn to the cooing sound in front of her. A plump male pigeon was strutting after a svelte female. She looked up. The Mister Softee ice cream truck that parked on the side entrance to the playground at the end of every school day was summoning children with its usual, Pied Piper jingle. Angie squinted: The ice cream guy, a thin man in his 40s with wide eyes and boyish blonde hair was the same here as on their Earth. Yanni's, the Greek restaurant around the corner from their apartment scented the air with grilled lamb, just like it did every day at home.

There were no swooping bats, streets filled with people over three meters tall, fire hydrants made of glass, buildings constructed with solar panels on all sides, signs advertising exorcists, people walking pet iguanas, a New York that was all beach, or soldiers standing on every street corner, like in the worlds in which they had landed. Nothing was out of the ordinary.

A car was double parked in front of Sid’s Deli, probably so somebody could run inside and buy a sandwich, just like normal.

Angie looked at Brian. "Are we?"

Brian rubbed the last of the ice away from his face. "It looks like it."  They stood in unison. "Let's see."

Angie and Brian always departed a world at 3:13 a.m. and arrived at the next at 3:13 p.m., one of the many puzzles of universe slipping. It was this exact departure and return time that made them grateful they wore accurate watches. “I’d hate to mess up the timing and be in a restroom with my pants down when we slip to another universe,” Angie remarked.” In the movies people always time travel or jump to different universes when they’re fully dressed and seemingly with their wits about them, but I can see how in reality things might not always work out so neatly.”

The kit had arrived on a rainy Saturday, giving Brian a full weekend to build his first watch. Brian's Build-a-Watch kit would have been an ordinary project had he not decided to enhance the watch’s glow with radium from an old Hamilton pocket watch he had found in an antique shop in Vermont, mixing the radium with another luminescent radioactive material, tritium and the superluminova the kit came with, and carefully painting the watch hands and numbers with the amalgam. Brian had hoped that by combining these three glowing materials he could create a brightness greater than the sum of the parts. An amateur’s idea, but Brian figured why not — after all, building a watch is about doing something new. The moment Brian wound his watch, bringing the Build-a-Watch to life, was the moment they began slipping between universes. Angie had her arm around Brian’s waist as he spun the crown for the first time, chirping with the cheerfulness of somebody about to christen a sailing ship with a champagne bottle. A blinding flash of light like being in the middle of a lightning bolt, a short, intense pain — and they were somewhere else. The first somewhere else was a Brooklyn that looked like it had been plucked out of the pages of a book about the world in 2100. A monorail system traversed the major streets and flying cars darted in between buildings. When night came, the sidewalks were illuminated from below.

After several trips, Angie and Brian understood that they would continue to slip from universe to universe as long as Brian kept the watch wound and on his person. And slip from world to world they must, until they found their home Earth. They were lost in physics beyond their understanding.

“You see that?” Angie pointed to the Mister Softee truck.

“You know his name?” Angie frowned.

Angie poked Brian’s hip. “I see. We may have to do something about that.”

They walked past the park’s small pond where boys and girls sailed toy boats, past moms and a few dads pushing strollers, past a couple taking a nap after a picnic lunch with a depleted wine bottle beside them. Brian noticed that his favorite Italian restaurant was closed, as it should be at three-thirty in the afternoon.

Angie squeezed Brian’s hand and tugged on his arm like a rider pulling on a horse’s reins. She stopped in the middle of the sidewalk in front of Sally’s Umbrella’s, a gift shop that was their one stop shopping place for birthday and wedding presents. Angie furrowed her brow. Her skin grew cool in Brian’s hand.

“You want to buy a present?”

“Let’s just go inside.” She released Brian’s hand in the store and drew in a long breath between her pursed lips. “Do you notice anything?”

“Look, Brian.” Brian pivoted three hundred sixty degrees to the left, then to the right.

“I don’t see whatever it is you see.”

“Look at their wrists. Look at everyone’s wrists.”

Brian took several steps forward toward the couple browsing the folk art on the wall in front of them. He then turned to the left and peered at the two high school girls chuckling as they read the text of the shop’s adult-rated greeting cards. “They’re all —”

“They’re all wearing watches. Everyone. I noticed that in the park, too. Everyone has a watch on, and not even a smartwatch. A mechanical watch. In just the past twenty minutes, I've seen Rolex, Panerai, and Grand Seikos like ours. I even spied a Credor tourbillon and a gold Patek Perpetual Calendar.”

Brian whistled without knowing he had. “This isn’t our world.”

“No.” Angie wiped her eyes with the back of her hand. She chuckled through her tears, “It’s a nice one, though.”

“Yeah. Everyone here wears a watch, a quality timepiece at that.” Brian turned toward the cashier whose Breguet Tradition was peeking out from under his sleeve. “This universe is far from awful. Better than bats darkening the sky or an Earth where the only thing to drink besides water is Dr. Pepper. We could do worse. We should stay.” Brian nodded. “Think about it. If there are an infinite number of universes, the chance we’ll get back to our own is close to zero. Probability is not on our side. The next world might be terrifying, like with a volcano where Brooklyn stands. I could live here in this universe, in watch world,” Brian said. “I could. This Earth is growing on me already. And you, babe?”

Angie smiled and kissed Brian on the cheek. “Our new home.”