“How do you know all this?” Calvin Hughes asked, continuing the conversation he and Alberta Singer had started online. Alberta had been explaining to Calvin and ten thousand other members of the Grand Seiko Owners Club the logic behind Grand Seiko’s serial numbering system. “Not only how do you know, but how do you remember?” 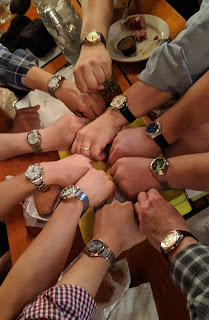 Calvin rested his frothy beer on the table. He lowered his voice to within a few decibels of the din in Calvin’s Cottage (no relation), an expansive restaurant serving burgers and other comfort foods. The group of twelve watch collectors had selected the place for its large, round tables, suitable for conversation and displaying watches. Alberta had brought three watches, a Grand Seiko Spring Drive with a blue blizzard dial and matching strap, a classic 56GS, and a diver, also a Spring Drive, that despite its substantial diameter didn’t look large on her thin wrist. Alberta Singer was the first person Calvin had ever met who owned a dive watch they actually scubaed with. He imagined her in a wetsuit, an image that pleased him.

The ten other group members were busy biting burgers, passing watches (thoroughly wiping the grease off their hands first), drinking beer, and having the kind of nerdy fun that watch collectors enjoy when they breathe the same air. A cacophony of colors reflected off the watch dials.

Alberta clasped her hands together. Her cheeks rose as she smiled. “I know it seems hard, but didn’t trigonometry seemed hard when you first learned it?”

“Let’s dial it forward in small steps, shall we?”

“That sounds like a good idea. You’re the teacher, I’m the pupil, and I’m all ears.” Despite his jocularity, he was serious about learning everything there was to know about Grand Seikos, especially if that meant spending more time with Alberta.

“In 1966 Seiko started using six-digit serial numbers on their cases, except for when they didn’t. Before then, they always used seven digits, but there’s overlap, so some years you’ll see both six- and seven-digit serial numbers. This is just for the caseback numbers; there’s a different system for the movement numbers.”

“But you don’t need to know it all to make sense of what Seiko’s doing. Think of the caseback numbering system not as a code that somebody’s using to keep a secret but as a way Seiko communicates with you. It’s not classified; it’s an announcement. Once you think of the numbers that way, that Seiko wants you to know what they’re up to, it becomes easier.”

“Gotcha.” Calvin waved to the waiter. He needed another beer on standby.

“The first digit shows the year the watch was made. The second number tells you the month.” She flipped over her steel 56GS and handed it to Calvin. She reached into her pocket and retrieved a magnifying loupe. “See the first digit, the 1?”

“Yes.” Calvin hovered the loupe in that sweet spot where the edges appeared crisp. 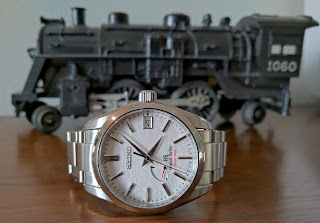 Calvin wondered if this was a good time to tell Alberta he didn’t have a girlfriend. He slid closer to her and was enveloped in her citrus perfume. She had a blue streak in her hair that reminded him of a Grand Seiko SBGH267’s dial. He thought her hair was pretty.


“Sure.” She didn’t retreat from him, which he took as a promising sign.

“Where does it say that the watch was made in 1971? Do any of the numbers indicate the decade? I don’t see any sevens.”

“Ah.” Alberta tapped the side of her head. “You have to know the decade, but that’s self-evident from the watch. Nobody would mistake a 1970s Grand Seiko for one made in the 1990s.”

“Somebody might,” Calvin thought as he wrapped his hand around his beer glass, calculating how much more to drink. He was walking a knife edge between too much alcohol, lest he not understand Alberta’s explanations, and not enough, because he needed the inebriation to work up the nerve to ask her out. Now that they were together in real life, he was more smitten with her than he had been when they were flirting on Facebook. Her soft-looking skin, rich brown eyes, long hair, alluring smile, and extensive watch collection shot Cupid’s arrow dead center through Calvin’s heart. His pulse had been steadily increasing ever since Alberta had RSVP'd yes to the group meetup. Calvin took another sip of beer. “If she doesn’t move her chair away and if she keeps laughing when I laugh, I’ll ask her out—in five minutes.”

Alberta’s hand brushed against Calvin’s, sending a wave of goosebumps up his arm. She pulled his arm close, flipped his hand over, and clicked her pen. When she finished writing on his hand, she announced, “All done. Now you have the basics of the Grand Seiko caseback serial numbering system.”

“Oh.” Calvin paused for a few seconds while his brain reengaged its gears. “Thank you.”

“The ink’s going to come off in the shower—”

“So you’re going to have to memorize it soon. I’m sure you can. There will be a quiz.” Alberta winked.

Calvin thought perhaps he didn’t need to increase his alcohol level to ask Alberta out.

“The first Grand Seiko watches,” she continued, “though manufactured in 1960, had seven-digit serial numbers. We think the third digit is for the particular factory in which that watch was made. The remaining digits tell you the order of production, from the first, which might be serial number 620001, to the last, serial number 629999, for instance — maybe. We’re not really sure about that part, either.”

“Are you not following me? Am I talking too fast? I sometimes do that when I’m excited or nervous.”

“No. I mean, yes, a little. But that’s not it.” Calvin dug inside his shoulder bag and retrieved a brown leather watch roll. He carefully unfastened the roll’s belt and removed the watch.

“Oh, a Grand Seiko First.” Alberta’s eyes sparkled and went wide. “You didn’t say you have an original Grand Seiko.”

Calvin flushed. “I got this a week ago, but I haven’t put it on yet.” He rediscovered his beer and then looked into Alberta’s eyes. “I wanted to put it on for the first time when I met you. I mean at this get-together. Like, with you.”

“You’re sweet.” Alberta touched Calvin’s hand again and pressed her leg against his.

He took a deep breath, willing her leg to remain exactly where it was. “But now that I know about serial numbers, I think there’s something odd about my Grand Seiko.” He flipped over the watch. “Look at the serial number. 9508867X. There’s a letter after the seventh digit.”

“Hmm.” Alberta scanned the watch using her loupe as if it were a Star Trek tricorder. She tilted the watch through a full range of angles and handed it back to Calvin. 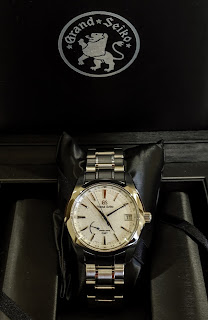 “I mean, double hmm.” Alberta rubbed her hands together. “Grand Seikos weren’t made until 1960. You can’t possibly have this watch because it appears to have been manufactured the year before the first known Grand Seiko. And yet—” Alberta retrieved the watch from Calvin’s open palm, flipping it over several times, “—you do. This watch shouldn’t exist.” Alberta squinched her eyes. “As for the ‘X’, I’ve never seen a letter as the last mark of a vintage Grand Seiko’s serial number. You’ve got a rare one—so rare nobody I know has ever written about it.” Alberta scratched her chin. “Tell me where and how you got it. I must hear all about this watch of yours. But first, put it on. I’m honored to be the first person to see you wearing your Grand Seiko. We’ll take a selfie.”

Calvin strapped the watch to his wrist. A second later, the cavernous restaurant disappeared. Instead of being surrounded by tables and food, the hum of conversation, and the smell of sizzling beef, Calvin was standing in a small room with white walls illuminated by overhead fluorescent tubes. To one side of the room stood a drafting board tilted at a forty-five degree angle, displaying a pencil sketch of a watch movement. A sign above the table read, “Seiko.” A row of pulsing vacuum tubes and an oscilloscope with a waving yellow line on a green screen sat on a shelf to the table's left. Adjacent to the scope was what looked like a large reel-to-reel tape player, its discs whirring, tape jumping back and forth, as multicolored lights on the panel below flashed. On the room’s other side stood a workbench with neatly organized tools and a cloth on which watch parts were spread. A Japanese man in his mid-forties wearing a lab coat hovered over them.

The man looked up from the workbench and replaced his loupe with a pair of tortoise-frame eyeglasses. He clicked off the tensor lamp shining on the watch he was operating on and rested his tweezers on the white cloth. Slowly, he removed his cotton gloves, surveyed Calvin’s face, and then stared intensely at Calvin’s wrist. He pointed to Calvin’s watch.

“That belongs to me,” he said in accented English. His unfazed expression was the opposite of Calvin’s look of bewilderment. “That Grand Seiko is my watch.”

“What’s going on here?” asked Calvin frantically. “Where am I? Who are you?”

Calvin’s mouth opened wide, but no sounds came out.

“That’s an experimental Grand Seiko. It was never meant to leave the lab. It has properties — you’ve no doubt figured that out in the past few moments. It’s a time travel watch. I designed it to return to me no matter how far into the future it went. Your future, for instance. You’re from?”

“2020,” Calvin heard himself say, though he had no sensation of his lips moving. “I was having dinner with friends, put this watch on for the first time, and then I was here in—”

“Yes. You said. Sorry.” Calvin wobbled as his knees weakened. He grabbed onto the table to keep from falling.

“I didn’t expect the watch would return with its wearer. It was designed to come back on its own.” Taizo shrugged. “But here you are.”

Taizo circled around from the far side of the workbench. He held out his hand, and curled his fingers inward, motioning to Calvin to give him the watch.

“You can build one that takes me back to 2020, right? I have a date. I mean I want to ask somebody out on a date.” Calvin nodded as if the gesture would create the reality he desired.


You can join the Grand Seiko Owners Club at www.gsoc.watch.