Do I Look Good?

“How do I look in this watch?”

It was too late to duck into the bathroom and pretend to have something urgent to do. Mom, who often calls at the most random moments, chose not to call now and save me. There was nothing on the stove about which I could declare an emergency, and the dog had been walked.

It wasn’t possible to ignore Tom, because he was hovering two feet in front of me, his breath minty from just having brushed his teeth. He tapped his watch crystal. “Do you think this watch goes with my outfit?”

I tried not to appear as if I were seeing his watch for the first time. I tried to hide any hints of surprise or novelty in my face by diving deep into a distant memory of when I scraped my knees in the playground falling off the jungle gym. 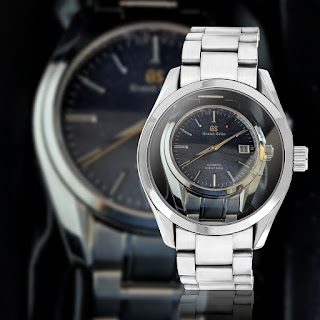 Was there a hidden message in Tom’s question, a question within a question? I narrowed my eyes and focused on his watch, a blue dial something. I must have seen it before. I willed my shoulders into spa relaxation mode so I wouldn’t shrug and give away my ignorance, a gesture that could easily be interpreted as willful neglect. I feel like I’m tiptoeing through a minefield without a map.

I squinted so I could read the dial without bobbing my head forward like a pigeon. I narrowed my vision into that netherworld between where distant objects appear in sharp focus and they vanish entirely. I inhaled a hopeful breath and said, “The Grand Seiko.”

I paused. If I’d gotten the brand wrong, Tom would have said something even before the final vowel departed my lips. “I like it. Your Grand Seikos are my favorites.”

Wait! Tom’s got more than one Grand Seiko, right? I tried to manually light up neurons, but even if I could hunt down the answer in my brain, it was too late. I’d already said, “Grand Seikos,” plural. I paused again, chilled ice replacing the red blood cells in my veins.

Silence. Okay, I’d gotten that correct, too. Tom had more than one Grand Seiko.

I felt as if I were in one of those horror movies where the victims are coerced from room to room, each space containing a more hidden and deadly trap. Molten lead that drops from the ceiling, oxygen that’s sucked out, a trap door opening to a piranha-filled moat, arrows that fly out of the walls, a giant lizard with blood-stained, razor-sharp teeth that pops into existence from out of nowhere.

I took a mental step forward. “I like the way the blue dial goes with your eyes.” I sensed my pores opening, sweat leaking out.

“My eyes are brown,” Tom said. He was a statue except for his arm, which swiveled up to his head and then rotated so that the watch’s dial was positioned like a third eye.

“I mean I like how the glacier-blue contrasts with your hazel-brown eyes. The watch’s blue is too gorgeous to play second fiddle to any other blue.” Tom was wearing black jeans and an orange golf shirt. His black socks peeked out from on top of the gray New Balance sneakers.

Tom’s lips morphed into a smile.

I’m doing okay. Should I stop now? Is that all I need to say? Is liking the color sufficient? Should I be complimenting a gear or something? Think Sally, think!

“The metal strap accents your muscles.” I nodded. “That’s a good choice for a BBQ.”

“I was thinking about wearing my Grand Seiko GMT. You know, the steel case watch with the gray chrysanthemum dial. It’s got a sporty, outdoors look that might be better for a garden party. I'll get it and try it on for you.”

My eyes darted to the clock on the night table. When I saw the time, my heart ramped up to half-second beats. 12:13 p.m. We’re already running late. No time to change watches.

I clasped my hands together. “This one’s perfect. It’s a daytime party, so a blue dial watch goes with the sky. Wear it. I can’t imagine seeing you in any other watch today, my handsome husband. You look sexy and stunning.”