“If I’d known you were going to be weird, I’d have gone to the party with Jimmy Howe.” Emma curled her lips into a half-smile. She flicked her head to the side, getting her hair out of her eyes.  “You’re a nice guy, Ben, but you’re a little off.” She studied the window and cupped her hands into the shape of binoculars, put her forehead to them, and pressed her hands against the glass. “I don’t see anything.”

“You mean Jimmy Howe from Engineering?” Ben shoved his hands in his pockets. “He doesn’t even like parties. He’s not interested in that kind of thing. Besides, he dresses weird. Pants too high, four pens in his shirt pocket.” Ben paused before continuing. “What else did you say?”

“I said, I don’t see anything.” Emma tightened the spaces between her fingers to block any remaining light. She peered through the window of the 51st-story apartment for half a minute, turned to Ben, and shrugged. “Nothing.” 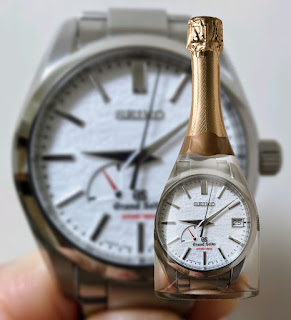 “It’s not like searching for Santa, who could appear at any random moment between sunset and dawn. We have to wait until exactly midnight, which is —” Ben scanned his Grand Seiko Spring Drive, a watch accurate to a second a day, a necessity if he was going to share the sighting with Emma, whose soft lips he desperately wanted to kiss, and whose green eyes enchanted him every time she looked his way. Ben had rehearsed asking her to be his date at their boss’ New Year’s party fifty times before working up the nerve “—in another seventy seconds.”

“If Jimmy Howe had been my date—” She held out her palms. “I know, I know. He wasn’t ever going to come to a party. But if he had, he would kiss me at midnight like normal dates do, instead of slinking off to the bedroom to stare through the window.” Emma sighed and shuffled her feet against the thick carpet, cracking sparks of static electricity. “I don’t know. Maybe I should go back to the living room and find somebody to raise a glass of champagne with in—”

“Twenty seconds,” Ben said. He squeezed her hand gently and to his surprise, Emma squeezed back.

“I haven’t believed in Santa since I was six.”

“This isn’t like Santa.” Ben lifted his other hand and glanced at his watch. He returned his gaze to the window and focused on the sky. Emma tracked his eyes, looking where he did. A faraway fluttering caught her attention. White wings mostly, though some were blue, green, and yellow. They carried themselves quickly but silently. They were flying up and north, forming a giant V against the night sky. But birds don’t fly at night…

As if reading Emma’s mind, Ben said, “Those aren’t birds.”

Cheers of “Happy New Year!” and the sound of corks popping zigzagged through the apartment to the bedroom.

“What am I seeing?” Emma pressed her nose to the window, fogging the glass as she spoke. “It looks like...magazines?” She wiped the window with her fingertips.

“Not magazines.” The flock was fading into the distance like paper lanterns carried away by a river. “Calendars. Those are the discarded calendars of 2019. It happens every New Year's, but most people are too distracted to look.”

Ben shook his head. "Wherever our memories dwell, I guess."

She stepped to within a breath away from him. “Now kiss me,” she said.