When I walked into the century-old building near 64th Street (they’ve asked me not to reveal the exact location) with its rusting fire escape and crusty brick exterior, my expectations of a wonderful experience evaporated. The lobby was a landscape of peeling paint and burned out incandescent bulbs that smelled of bleach and insecticide. 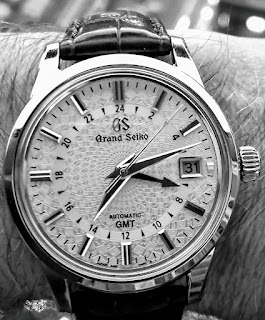 I was greeted in silence by a god and goddess, a man and woman in their mid-twenties, both blondes with coral blue eyes, who motioned me in. He was wearing a Credor Eichi II, a sublime contrast to the black t-shirt and jeans that clung tight against his muscular body. Strapped to the wrist of the female greeter’s flawless body was a Jaeger-LeCoultre Reverso Tribute with a burgundy dial and deco tones that made me feel as if I was wandering through the 1920s.

I showed them my Grand Seiko Red Flake, which was my sole identification. The man with the Credor examined my watch, then consulted his iPad. After the woman nodded to him, they wordlessly escorted me to a plush, velvet chair with expansive arm rests and deep cushions. I was expecting leather, but as soon as my body melted into the chair I realized the Winding Lounge selected soft fabric furniture rather than leather because leather squeaks. The room reminded me of my Snowflake’s dial, a hushed vista devoid of sound other than slight wisps of snow flowing over a snow covered field. The room’s subdued lighting came mostly from hidden floor lamps. A thick, cerulean carpet with an enigmatic Asian pattern covered the entire floor.

Curiously, I noticed the woody, piquant aroma of coffee, but no coffee was served, I presume to preserve the Winding Lounge’s tranquility. I also presume that everyone who was leaning back in their chairs, faces bathed in serenity as they wound their watches, had already consumed a cup or two of coffee before arriving. In addition to me, there were ten people, six men and three women, most of whom were dressed in crisp business suits. One man was casually dressed in khakis and a leather jacket, and one woman was wearing a salmon pullover sweater, jeans, and black boots. The lighting was such that I wasn’t able to make out the watches, except for that woman’s Vacheron Historiques American 1921.

In addition to its veiled location, the Winding Lounge is only open from 5 a.m. until 10 a.m. When I heard the rumors about the Winding Lounge — that there’s a place where all you do, all you want to do, is wind your watch, I doubted its existence. But I get it now. In the frenetic turmoil that is most people’s mornings, there’s no time to enjoy winding your watch. At home — getting the kids ready for school, hunting for the keys, trying to balance a healthy breakfast with a speedy one, picking up where you left off on a stressful conversation with your spouse — there’s no way watch winding can be the delight it should be. At home, winding your watch is just another item on your frenzied to-do list.

The Winding Lounge is the antidote. It’s like an isolation tank separating you so completely from the chaotic world that your mind and body journey along a soft grass path through a forest, golden sunlight filtering through the green canopy. Watch winding should be the connection between our flesh and watches, but noise, daily distractions and urgencies prevent us from enjoying this simple pleasure. The Winding Lounge is the intersection of passion and contentment.

I know I’m not supposed to reveal the Winding Lounge’s location, but I hope I’m allowed to write about it.

The Winding Lounge is a work of fiction.