Leaves of poplars pick Japanese prints against the west.
Moon sand on the canal doubles the changing pictures.
The moon’s good-by ends pictures.
The west is empty. All else is empty. No moon-talk at all now.
Only dark listening to dark.


I've only had my Seiko Spring Drive moonphase for a little over 24 hours, but I'll tell you this. If I wasn't wearing the SNR017 tonight, I might not be writing this article. 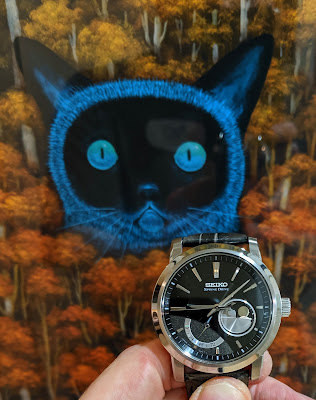 You need a moonphase. And while you could buy another watch company's moonphase, would you really want to rely on something other than a Spring Drive?

Earlier this evening I was abducted by aliens (again). It was only for an hour, and I can't say for sure what experiments they conducted on me during that time though I have my suspicions, but thanks to my Spring Drive moonphase watch I was able to tell that I was returned to the real Earth and not some trickery planet. After the lights of their transporter stopped twinkling, I found myself in a park, on soft, green grass that smelled like it had been recently mowed. But was it home? I compared the moon on my Seiko SNR 017 to the phase of the moon in the sky. They agreed and I knew I was back on our planet Earth. Phew! While the aliens are far more advanced than us, they can't outwit a Spring Drive.

Most readers of this website will be familiar with how a Spring Drive works, but in short a Spring Drive is a watch movement that’s powered by a mainspring like an ordinary mechanical watch. Instead of the familiar escapement, Seiko uses fancy wizardry in its place: A tiny thinking machine, an integrated circuit, compares the movement of the glide wheel to a highly accurate quartz crystal eight times a second. If the second hand is moving too fast, the watch deploys electro-mechanical braking to slow it down. Spring Drives are accurate to a second a day. A Spring Drive is not a quartz watch; there is no battery or capacitor. You have to wind it (or let the rotor power the mainspring), just as with any other mechanical watch. Seiko calls its magic a “tri-synchro regulator.” Think of the quartz crystal oscillator in a Spring Drive as a reference you’d set an ordinary watch to, such as your phone, an atomic clock on the internet, a GPS watch, or some other precise time device. If it sounds like Spring Drive is a technology that was invented in the future, it probably was.

I searched for a Seiko moonphase for a long time and when this one arrived yesterday from a seller in Greece I did a combination of somersaults and handsprings. (From Japan to Greece and back to Japan this watch traveled.) Manufactured in 2008, the SNR017 deploys a 5R67A movement, and as with all Spring Drives, the second hand’s fluid journey across the dial is a delight for the eyes.

The SNR017 is a gorgeous watch. Like the moon, this watch's beauty is immortal. 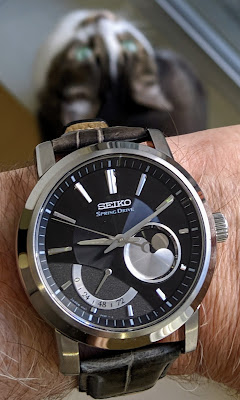