Wake Up, Your Watch Is Here

I'm not fully responsible for my mistake.

We had an apartment building meeting today — Sunday morning at the crack of 10 a.m. — which meant rise and shine hours before noon, the time at which rationality and wakefulness coincide.

After wearing out the snooze button, I kicked the blanket aside, showered, picked up the t-shirt closest to the shower door, put it on, gathered the rest of my wardrobe from the hamper's top layer, and ran for the door to get to the meeting before somebody nicknamed me “the late guy.” 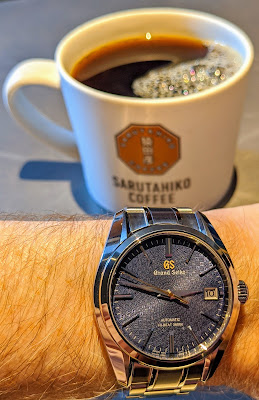 Maybe it was because I was exhausted from hitting the snooze button so many times or because the sorcerer’s muck called sleep still crusted my eyes, but it wasn't until I had one untied shoe out the door that I realized I had forgotten coffee and my watch.

I didn't have time to brew coffee and set a watch, so I chose the watch. And then it hit me: A hi-beat. That's what I need. A Grand Seiko hi-beat promises to send your body and mind into accelerated motion, the way a tuning fork vibrates guitar strings, transferring its magical energy into every cell in your body. Pleased with my genius revelation, I dashed into the hallway, nearly tripping over my other untied shoe, and sent a secret message to the elevator, "hurry!," by Morse coding the elevator button.

But you know what? I looked like one of those bobbing head dolls for the next hour and a half. Apparently, I was wrong. Hi-beat doesn't affect the body of the person wearing the watch.

So here I am now, having my morning coffee at 3 o'clock on a November afternoon, my inner mainspring slowly, but finally, winding, the world coming into focus. Maybe next time I should wear a Spring Drive because that will make me spring?