Brittany O’Donnell’s door was one of the last to close in Oklahoma City, but closing it didn’t save her. The Tyrannosaurus rex butted its head against the wooden door of her one-story rambler, crashed through, and snatched Brittany around the waist in its massive jaws, piercing her flesh in a hundred places. Brittany’s screams could be heard two houses over, even above the thunder of hundreds of prehistoric behemoths that swarmed Oklahoma City’s streets.

Herds of T. rex, velociraptors, and other carnivores fanned out across America. Pterodactyls blocked the sun. The creatures consumed human flesh whenever they encountered it, quickly acquiring a taste for meat that was two hundred million years new. The Army and National Guard attacked from the ground; the Air Force fired missiles and bullets from above. The president reassured the country that America’s military would defeat this onslaught, but privately the president and her advisors were unsure, because the source of the antediluvian invaders seemed unstoppable.

Nick Lang was enjoying the crab gratin’s aroma when he tripped over a leg that blocked his path. His forward momentum abruptly stopped, propelling his tray's contents — the gratin, water bottle, rhubarb pie, and silverware — into the air. 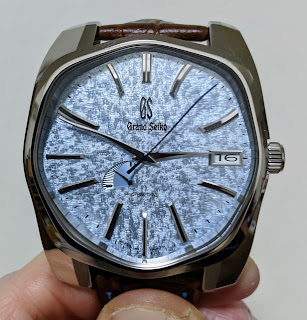 Laughter had already been building inside the bellies of Altso Miller, Abby Chernov, Bernie Zehfram, Luis Buhle, and Peter Whipple, the one who had stuck his leg in front of Nick. In the instant between when Nick connected with Peter’s leg and his food took flight, his five coworkers burst into laughter.

“Hey, Seiko man,” Luis crowed. “Did your watch throw you off balance?” He slapped his knee while the others laughed even louder.

Bernie dug a fork into his gratin, OK Oil & Gas’ lunch du jour, and chimed in, “It looks like a watch a penguin would wear.” About half his gratin spat out while he talked.

“A real watch,” Abby added “Get one. Wear one. You don’t want to be a ginzel your whole life.” She held her wrist up, flaunting her black-dial, black-bezel Rolex Submariner. The rest of her lunch mates held their arms high, too. Nick counted one Omega Speedmaster, a Rolex Pepsi, a Rolex Deepsea, and a Sinn U1.

Nick’s fingertips tingled as they glided over his Grand Seiko Snowflake’s crystal. How he wished it were, and how he wished he could be somewhere else. Working as an oilman was grueling, with long days under scorching skies, the only relief coming from fans blowing hot air around the tented commissary, which was no relief at all. No relief and no escape from coworkers who channeled the worst of his middle school years with taunts as inescapable as the fiery sun. Every hour of every day they tossed epithets his way: “Seiko man,” “Spring Drive fairy,” “snowflake,” “communist geologist,” (even though Nick had master’s degrees in geology and physics), and “watch wimp.”

“Get a Swiss watch like a real man,” Peter shouted as he twisted his wrist and aimed his Sinn U1 at Nick.

In a low voice Altso said, “Pete. Sinn’s a German watch, not Swiss.”

“Whatever. It’s close enough.” Peter turned back toward Nick. “You want to fit in, buddy? Wear what we wear. Just a friendly word of advice.”

Nick knew it was too late to fit in. As the site’s resident geologist, he’d always be the outsider, the dweeb in the proverbial sweater vest. Nick’s job was to think about where and how to inject water — actually, water combined with various chemicals and sand — to extract the maximum amount of natural gas. Never mind that by the end of the day, Nick was coated in oil and dirt like the rest of his team, as exhausted and stiff as his crew. He manned pipes, secured storage tanks, dug holes, and built rigs like everyone else. But his scientific role was a wall of enmity that would never be breached. 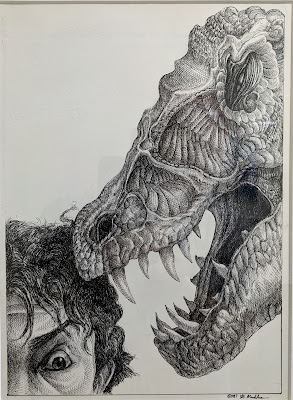 After lunch, Nick surveyed the fracking site. He had just increased the water flow to maximum — 4,000 gallons per minute, well within safety limits but still important to monitor. Nick liked to stand close to the spot where the pipe entered the ground. He felt in tune with the strata below, sensing minute changes in vibration as the high-velocity water opened cracks in the earth. “This is a good dig,” he thought.

The rancor of the machines prevented Nick from hearing the five pairs of feet approach him from behind. He should have been aware that something was amiss, because his team wasn’t visible, but his senses were more in tune with the Earth than they were with people. Nick flinched as Luis and Bernie each grabbed an arm and Abby held Nick in place with a bear hug from behind.

“Fuck, what are you doing?” Nick shouted. His words extended only a few feet before they were shattered by the equipment’s noise. “Let me go.” Nick tried to wriggle free but was held firmly by the three burly oil workers. “Let me go!” Nick raised a leg, but before he could stomp on Luis’ instep, Luis slipped his foot to the left.

Peter bopped Nick on the top of his head with his palm. “We’ll let you go in a minute, snowflake.” Peter circled around Nick and flashed a toothy grin. “But first, you’re going to give up your Seiko. Once it’s gone, you’ll be getting a real watch like the rest of us.”

“Grand Seiko.” As soon as Nick said the words, he regretted saying them. Altso slapped Nick on the back of the head. “Pay attention, Seiko man. We’re doing you a favor. Here’s how it’s going to go down.” Altso faced Nick. “First, off comes your watch. Two, into the hole it goes. Three, you find yourself a Swiss watch like ours. Four, we leave you alone. I dunno that we’ll ever be buddies, but I promise you’ll be better off with a Swiss.”

“No!” Nick’s brain was delivering rapid fire imagery, like a time-lapse movie. Numbers, symbols and formula lit his neurons. “No, this is a bad idea.”

“It’s the best idea,” Abby said, as she tightened her bear hug.

Nick spoke breathlessly. “It’s not that.” He shook his head. “Okay. I’ll get a Rolex or Omega or whatever. Just don’t put the watch into the fracking pipe.”

Peter unfastened Nick’s watch and pivoted toward the fracking hole.

“No, no! This is a Spring Drive. It uses electromagnetic braking, tuned with a quartz oscillator. It’s not designed to be simultaneously subject to high pressure and high speed. If the Spring Drive movement survives the journey, accelerating and compressing, you’ll create a runaway gravity well, and something bad might happen. Something really bad…” Nick’s voice trailed off as he watched Peter drop his watch into the pipe. “Something awful.” Nick went limp.

Abby, Luis and Bernie released him. Nick bent over, gasping, his heart beating as if it wanted to escape from his chest.

“No.” Nick stood up, stiffened his back, and pointed to the creature emerging from the fracking hole. “Awful like opening a fracture in time.”