When You're a Watch Nerd...

I want to apologize for my behavior as the guest speaker today at your English for Japanese conversation group.

I had intended to spend the hour reading my short story (which I did) and then answer your questions, so you’d have a delightful, informative, and educational time. 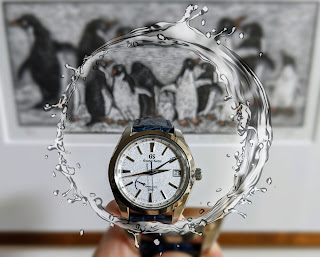 When somebody asked if I have any hobbies, and I said, “I collect watches,” I thought those three words would be the end of the matter, and that we’d scoot right back to talking about English.

How was I supposed to know that one of the group members was wearing a SBGA259, the Golden Snowflake? And when it turned out that this Grand Seiko wearer was the one person who was participating by Skype because he’s the captain of a Japan merchant vessel and currently at sea, can you blame me for wanting to spend a few minutes chatting about Grand Seiko and exchanging wristshots via Skype?

I apologize, too, for what happened after another group member asked, “What’s a Spring Drive?” I was duty bound to explain the Spring Drive movement, which, as you found out, also meant I had to explain the differences between mechanical and quartz watches. I’m sorry that I didn’t know the Japanese words for escapement, mainspring and crown. And I didn't mean to frighten anybody when the phrase “Quartz Crisis” slipped out.

I hope you enjoyed the close-ups of Captain Ito’s Golden Snowflake as much as I did. It’s hard to appreciate the Snowflake’s dial via Skype, which is why I suggested he hold his watch up to the camera for several minutes. Even with Skype, connected to a ship in the middle of the Pacific, the Spring Drive’s gold second hand flowed across the dial like a leaf in a gentle breeze. Wasn’t the live video of his watch’s open caseback stunning? I especially liked the part where he spun the rotor.

A Spring Drive is the perfect watch for a Merchant Marine Captain; it’s got accuracy, good looks, and no battery to run down. I was glad to learn that he also has a Grand Seiko quartz on board. That’s my kind of ship’s captain!

I’m sorry I was so easily distracted from talking about my story.

I am glad, though, that among the new words you learned today was “nerd.”